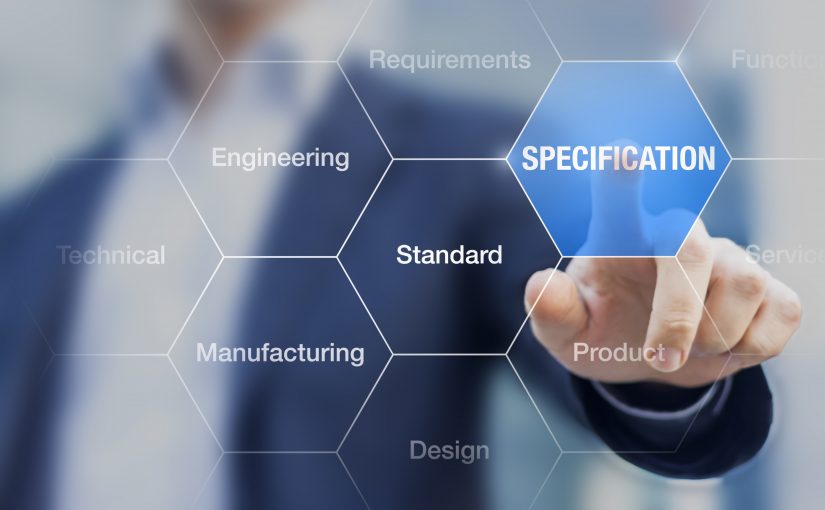 Dimensional control is not always easy with complex part geometries and pressure to get the product out the door.  To better define a part, geometric dimensioning and tolerancing (GD&T) is often used as a symbolic way of showing specific tolerances on drawings.  GD&T is a valuable tool that effectively communicates the design intent to manufacturing and inspection.

Those who do not understand GD&T often ridicule it as a mysterious language that the engineer or designer uses to hold tight tolerances.  But a geometric tolerance can actually give more tolerance than a conventional tolerance.  Once the hurdle of learning GD&T is overcome, this mysterious language can make quality control a more effective process.

GD&T originated during the 1940s, when precision military parts needed to be produced more efficiently.  The GD&T system has evolved over the last sixty years as new symbols have been added; the official standard that governs GD&T is ASME Y14.5, published by the American Society of Mechanical Engineers.  The growth of GD&T was spurred by the need to overcome three disadvantages of traditional coordinate tolerancing:

A simple example is shown below.  The hole is located from the two edges using traditional plus/minus tolerancing. 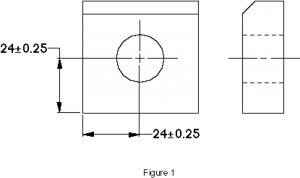 First, notice the shape of the tolerance zone that controls the location of the axis; it is an imaginary square of 0.5 x 0.5 mm.  That means that we could manufacture a hole whose axis is at the very corner of the tolerance zone, but if we have a hole off by the same amount to the side, it would be rejected. 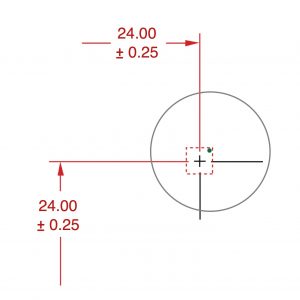 This doesn’t make sense; if the hole at the corner was acceptable, then all holes produced at the same radius from center should function just as well.

Using the GD&T symbol for position, we can translate that square tolerance to a circle of diameter 0.7 mm.  By using the GD&T method to position this hole, we have increased the tolerance by 57 percent!

The second problem with the “old-fashioned” tolerancing method is that it holds the same tolerance value for each part, regardless of the actual size.  In our example for the hole, let’s assume that it is simply a clearance hole that a pin will drop into.  In that case, a smaller hole should be held more accurately, but a larger hole could be allowed to drift more off center, and it would still function properly.  In the GD&T system, a modifier called “Maximum Material Condition” could be added to the callout to indicate that the tolerance will increase as the hole’s size increases.

The last disadvantage of this type of tolerance is the confusion about which side is to be set up on for inspection.  If the part is perfectly square, it would not matter; but what if the part is made with a slight angle between the two sides?  If the part is set flat against the bottom surface, then the hole should measure 24 mm from bottom, and the 24 mm from the side would have to include the gap.  If we set the part flat against the side, though, we might find that the hole is only 22 mm from the side, and 26 from the bottom.  Is it a good or bad part?

With geometric tolerancing, the designer would establish datums from each of the two surfaces, and label them on the drawing with letters.  Those datums would then be identified in the GD&T callout in their order of precedence.  (For parts such as our example, the back face might also be identified as a datum to ensure perpendicularity.)  Now every inspector would know how to set the part up without question!

It is important to note that GD&T does not necessarily replace plus/minus tolerancing; rather it complements regular tolerances.  Our example could use the GD&T symbol for position to locate the hole; while other specs such as the hole’s size would still be shown with conventional tolerances.  In all, geometric dimensioning and tolerancing has fourteen symbols, each defining a different type of tolerance.  While this may seem confusing at first, it allows a more precise definition of a part by giving us more tolerancing tools.  It is therefore important that everyone involved in design, manufacturing, and inspection be fluent in the GD&T language.  The Luminous Group offers customized courses in GD&T for your group; contact us for more information or a price quote for an on-site class for your group.

John-Paul Belanger is a Senior Consultant with The Luminous Group. He is an expert in the application and interpretation of GD&T (geometric dimensioning and tolerancing), and has extensive experience in FMEAs, control plan development, error-proofing, and bill-of-materials creation.